‘Del Boy’ is proof that entertainment value is far more important than shiny stats. A pay-per-view mainstay, it scarcely matters if the well-loved heavyweight wins or loses, and he gets the biggest fight of them all – a shot at Tyson Fury – next month.

The indefatigable Spaniard can never, ever be written off. The two-time IBF belt-holder reinvigorated his career yet again last week with a ferocious featherweight beat-down of Jordan Gill.

Beaten only by Lerrone Richards in almost five years, the former WBA 12st belt-holder upset his undefeated countryman Daniele Scardina in May.

McCarter has straddled eras in women’s boxing, turning pro in 1998 and remaining, at 43, a highly ranked welterweight. She hasn’t lost since 2007.

Super-middle Rosado usually loses in world class, but he always, always comes to win – and sometimes he does. Just ask Bektemir Melikuziev, who suffered a highlight-reel knockout loss to ‘King Gabriel’ last year. 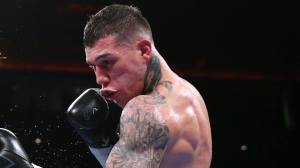 Forty-three-year-old ‘Barbie’ lost to WBC super-bantam queen Yamileth Mercado last week, but she has been one of the most accomplished and consistent world-level women’s boxers of the past 15 years.

The Dominican super-flyweight has had 47 fights but is still only 31. Jimenez overcame a dismal start to his career, losing seven of his first eight bouts, to become a decent fringe contender. He held Donnie Nietes to a draw last year.

At 41, super-feather Gonzalez has been treading water at home in Mexico in recent years, but is 11-1-1 since 2015. As an exciting ex-WBC titlist with a big name, expect him to keep getting bookings for some time yet.

The Mexican veteran may have gone down to a very rare stoppage defeat last time out, to Gary Culley, but remains a high-level gatekeeper. The former IBF lightweight holder was on the wrong end of a very contentious decision against Lewis Ritson in 2020.

Soliman remains a regular TV fixture in Australia even as he nears his 50th birthday. Exciting in an unorthodox sort of way, the one-time IBF middleweight belt-holder is on a winning run of three.

Sweet D Files: When it comes to retirement, there are more Brooks Hatlens than Floyd Mayweathers in boxing

November 19, 2022 Karl Boxing Comments Off on Sweet D Files: When it comes to retirement, there are more Brooks Hatlens than Floyd Mayweathers in boxing

IN THE epic movie The Shawshank Redemption, do you remember when Brooks, the elderly prison inmate is paroled for release? By the time he gets out Brooks has served 45 years of hard time and […]

BN Preview: Regis Prograis and Jose Zepeda have something to fight for

November 28, 2022 Karl Boxing Comments Off on BN Preview: Regis Prograis and Jose Zepeda have something to fight for

IT’S hard to believe it has been three years since Regis Prograis fought tooth and nail with Josh Taylor in London, England and fell just short, losing a majority decision after 12 rounds. Since then, […]