WHEN you try to picture the boxers we associate with the tag “nearly man” you invariably think about the ones who have fallen just short of winning world titles or have, in those moments when a title was on the line, either been knocked out when winning or not been given a fair shake on the judges’ scorecards.

For me, though, what typically comes to mind is someone like John Ryder; someone who, at 34, seems forever stuck in the mud, unable to gain momentum even when the car is in gear and things appear as though they are potentially heading in the right direction.

Tonight (November 26) in London, for example, Ryder was paired with fellow Brit Zach Parker, an undefeated super-middleweight with plenty of ambition of his own, and the hope going in was that the winner would move on to compete for world honours in the future. Certainly, what no one wanted was for the result of this fight to be contentious or for there to be any sort of confusion at the end of it.

And yet, sadly, that is exactly what we got, with Ryder’s fifth-round “victory” ultimately secured by virtue of Parker breaking his hand and refusing to carry on. The fight therefore was over before it had really got going and, worst of all, the celebration Ryder would have to produce when learning the fight was over was one both forced and hollow to say the least. 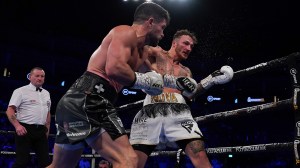 Still, what could he do?

On paper, Ryder, 32-5 (18), does at least now boast a win over Parker, though I’m sure it’s one Parker will at some point look to get back. Moreover, Ryder is, to his annoyance, becoming somewhat familiar with the feeling of anticlimax, having had numerous fights previously marred by confusion or controversy or simply the feeling of taking one step forward and two steps back.

In 2019, for instance, many felt he had done enough to beat Callum Smith, a fighter then unbeaten 26 fights, only for Ryder’s work to be mostly ignored by the judges who scored Smith the winner by unanimous decision. Earlier this year, too, Ryder’s breakout win over the American Danny Jacobs was one sullied a tad by the fact it was now Ryder’s turn to receive the benefit of the doubt from judges, two of whom had him winning by scores of 115-113. That result, or at least the close nature of it, meant Ryder stepped sideways as opposed to forwards, as did the event itself, hidden away in Alexandra Palace and shown only on an app.

The aim, then, going into tonight’s fight against Parker, 22-1 (16), was to make a statement and trigger some real forward motion. Speaking in general terms, the aim was to separate them and, in doing so, establish which of the two stood a better chance of one day competing for and perhaps winning world honours at 168 pounds.

Yet, alas, following just four completed rounds of action, we were left none the wiser. Worse than that, such is the way of these things, we are now likely to be subjected to a rematch, something that will steal even more time from a 34-year-old who, ideally, needs to be making the most of his prime years and not – as ridiculous as it sounds given the manner of the “win” – going over old ground.

As for Parker, a man six years younger than Ryder, it would be easy to criticise him for not continuing in the fight when nursing a broken hand. However, that, a criticism only fellow fighters can really fire at him, is not one anybody wants to be making lightly, nor does it change the fact a potentially engrossing super-middleweight fight between well-matched Brits kind of feels as though, somehow, it didn’t even happen tonight.

Panel: How much interest would you now have in Chris Eubank Jnr vs Conor Benn should it be rescheduled?

October 11, 2022 Karl Boxing Comments Off on Panel: How much interest would you now have in Chris Eubank Jnr vs Conor Benn should it be rescheduled?

Yesterday’s Heroes: An appreciation of the globetrotting Tom Heeney

October 11, 2022 Karl Boxing Comments Off on
Yesterday’s Heroes: An appreciation of the globetrotting Tom Heeney

The story of Gene Tunney’s challenger Tom Heeney’s trips to London I HAVE to agree with Steve Bunce, who stated in his column (September 29) that Gene Tunney is “arguably, the most overlooked and under-appreciated […]

Rise of Hercules: Mike Weaver and the importance of never giving up

November 21, 2022 Karl Boxing Comments Off on Rise of Hercules: Mike Weaver and the importance of never giving up

IT’S OFTEN assumed that every fighter starts out with the intention of becoming a world champion. But after beginning his professional career with a 6-6 slate, those intentions had to be fading fast for heavyweight […]