IT is a testament to the quality of the performance Josh Kelly produced in Newcastle last night (December 2) that a highly-anticipated 50/50 North East clash between the Sunderland man and Troy Williamson never really caught fire or developed into the domestic classic some were forecasting.

Many beforehand were unable to pick a winner in this one, yet Kelly’s eventual performance was so good, and so dominant, he would end up making a mockery of such indecision. The fight, supposedly a close affair on paper, proved to be anything but in reality. In reality, it would instead conclude with a jubilant Kelly hearing scores of 119-111, 118-110, 119-109 all in his favour (as game as he was, I failed to give Williamson a single round) and struggling to then hide his pride when announced as the new British super-welterweight champion.

Certainly, that was what Kelly did with Williamson in Newcastle on Friday night. Not just a fight for bragging rights, this was, in theory, going to be the ultimate test of Kelly’s mental and physical health. It was, we were led to believe, either going to make or break him, with plenty viewing the latter as the more likely outcome. Williamson, they said, was just the type to get under Kelly’s skin pre-fight and just the type to then wear him down during the fight itself.

Or so they thought.

As it happened, as early as round one we could see a clear difference between the two North East rivals in terms of both footwork and hand speed and this difference, one we suspected going in, allowed Kelly to make the start he very much needed. Call it a statement, call it setting out his stall, he stood with Williamson early, refusing to run, and in doing so managed to make a dent in his opponent with a beautifully-picked right uppercut and left hook combination, the two punches momentarily wobbling the legs of the British welterweight champion.

That, as an early breakthrough, was key. It was key to both Kelly settling into the contest and Williamson knowing he had to think twice before marauding after his challenger and putting his hands on him. Best of all, as far as Kelly was concerned, it showed Williamson that he possessed the punch power, albeit early, to stagger him and make an impression on him.

In fact, if looking for confidence, it was as good a start to the fight as Kelly could hope to make. He impressively built on it, too, boxing well for the next couple of rounds with his hands dropping lower and lower, a sign not of fatigue but rather comfort. From this stance he would go on to land a lovely left hook to the body in the third round, as well as a variety of snappy jabs Williamson, the one with the higher guard, failed to see coming.

Inevitably, of course, given his aggression, Williamson was to find some success and, for him, this moment arrived in the fourth. It came in the form of a right hand he landed on Kelly as the action started to become a little sloppy and for the briefest of moments Williamson and his army of Darlington fans allowed themselves to dream.

It didn’t last long, mind, this period of excitement. By the end of the round, in fact, Kelly was again standing in his corner singing along to whatever awful song was being pumped out by the Newcastle Arena PA system between rounds. In these moments, something Kelly repeated throughout the contest, it was easy to accuse Kelly of maybe trying too hard to show he was calm and confident and doing okay. (If, after all, he was truly feeling this way, why is there then the need to demonstrate it by way of a visual representation?) But, ultimately, if that’s how Kelly wants to navigate his way through fights, and if it works, only a fool would say a word against it.

Tonight, if just tonight, it did work. His projection of cool in the corner spilled over into his work once the bell sounded and, in the fifth round in particular, he started busting Williamson up, proving he had the spite to go with his swagger. Early on in that round he buckled Williamson’s legs with an excellent right hand to the side of his head and then later enticed Williamson to come forward, at which point Kelly set a trap for him to walk directly into.

This happened over and over again, not just in that round but in every round, and Williamson’s frustration threatened to boil over at times. There was a moment in the sixth, for example, when the referee had to warn the champion for using his forearm to try to position Kelly to land something of substance. There was also a subsequent warning for him to stop using his shoulder on the inside.

Kelly, though, didn’t seem to care. He took another decent right hand from Williamson in the seventh but, as usual, was able to draw the sting from it by cleverly riding it as it arrived. He then landed a big right hand of his own not long after this and duly smiled upon seeing the impact it had. This led to him finishing the round with his back against the ropes – by his own volition, of course – and producing his best Emanuel Augustus impression, both hands by his sides, swaying back and forth from the hip.

Perhaps sensing what everyone else did, Williamson’s corner could be heard shouting to him at the start of the ninth, “Busy, Troy, busy,” but, alas, he needed punches, not words. Stung whenever he tried to get busy, stung whenever he so much as tried to get close, he was hurt again in that round, the ninth, by a Kelly uppercut, which caused him to immediately hold.

Still he kept trying, though, and there were signs, to his credit, of a double jab in the 10th, which backed Kelly into a corner for at least a few seconds. Troy attacked him once there, knowing he now had to, only for Kelly to just as swiftly respond with yet another picture-perfect uppercut. By then, if not before, it became clear: anything Williamson could do, Kelly could do twice as quickly and twice as well.

The final two rounds were a continuation of all we had witnessed throughout the 10 previous. Never really pushed, either physically or mentally, Kelly remained relatively fresh, spoiled only by a slight cut on the head he picked up in the 11th, and was therefore able to keep moving and keep pecking with his punches from afar. Occasionally, too, when he wanted to thrill the fans, he would again whip out his go-to combination, the right uppercut and left hook, just to show he still could. 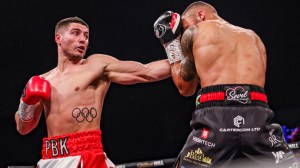 As it turned out, all the pressure was on Kelly before the fight, not during it. Which is another way of saying, as impressive as it was to see how he handled all that pressure beforehand, especially given what he has been through pre- and post-David Avanesyan, we still do not know how he will respond when that kind of pressure is again replicated in the ring. Williamson, you could argue, tried to exert some of that same pressure tonight, using that Avanesyan loss in 2021 as the blueprint, but if tonight proved anything it was that there is a huge gulf between the likes of Troy Williamson and the likes of David Avanesyan.

Still, for now, that’s okay. What’s more, there is a certain irony to the fact it was the British title that in the end brought out the best in Josh Kelly and, not just that, meant the world to him once it was fixed around his waist. Kelly, after all, is someone who has been smothered with and suffocated by hype since day one and was a fighter purposely fast-tracked towards world title opportunities. In going back a few steps, however, and in returning to base, we have not only tonight seen him flourish but can maybe now see, for the first time, a clear path to bigger honours in the future.

Again, though, that should wait. Still only 28, Kelly last night offered a reminder that fighters should ideally learn to walk before they attempt to run. His win was also a reminder that wins like his should be celebrated for what they are – a lesson delivered against decent domestic opposition – and not used as fuel to get the hype train moving once more.

Yet all I would say to that is this: “Be careful.”

With a fighter like Kelly, 13-1-1 (7), I suspect there is always going to be the temptation to rush things. You see the amateur pedigree, you see the potential (both in the ring and elsewhere), and impatience will naturally motivate you to accelerate his progress ahead of time. You see the commodity rather than the fighter. You dream of paydays in the future rather than think about the tests he requires in the here and now.

However, in addition to suffering his first pro loss against Avanesyan in 2021, Kelly was also served a warning that night; a lesson. He has shown since then that he is more than just a pretty face with prettier moves. He has shown, by choosing to explain his own downfall, that he is deeper than that, more complicated than that. Which is why to now risk rushing him is to risk burning him out mentally and, in turn, wasting all his undoubted physical potential. There is, ultimately, no need to rush him towards “world-class” or even so much as describe him as “world-class” at this stage in the game. Besides, in light of what he produced with his back against the wall (or ropes), “masterclass” would have sufficed last night.

BN Preview: Regis Prograis and Jose Zepeda have something to fight for

November 28, 2022 Karl Boxing Comments Off on BN Preview: Regis Prograis and Jose Zepeda have something to fight for

IT’S hard to believe it has been three years since Regis Prograis fought tooth and nail with Josh Taylor in London, England and fell just short, losing a majority decision after 12 rounds. Since then, […]

Sweet D Files: When it comes to retirement, there are more Brooks Hatlens than Floyd Mayweathers in boxing

November 19, 2022 Karl Boxing Comments Off on Sweet D Files: When it comes to retirement, there are more Brooks Hatlens than Floyd Mayweathers in boxing

IN THE epic movie The Shawshank Redemption, do you remember when Brooks, the elderly prison inmate is paroled for release? By the time he gets out Brooks has served 45 years of hard time and […]

Conor Benn: “I’m a clean athlete and we’ll get to the bottom of this”

October 6, 2022 Karl Boxing Comments Off on Conor Benn: “I’m a clean athlete and we’ll get to the bottom of this”