THE night began with Gordon Ramsay of all people telling everyone, “Fights like this only come along once in 20 years, so we’ve got to enjoy it.” It then ended with Derek Chisora losing for the third – yes, third – time in 11 years to Tyson Fury (this time by stoppage in 10 rounds) and everybody other than Gordon Ramsay and the 60,000 other sadists at Tottenham Hotspur Stadium saying everything they were saying before the fight, only now with even more indignation.

In other words, the night began ugly and stupid and ended much the same way. In between those two points, meanwhile, as if it even matters, Tyson Fury did whatever he wanted to do in the company of Derek Chisora and Derek Chisora tried as best he could to not win the fight but complete what should be a far simpler task: landing a clean punch.

Alas, he didn’t come close to doing either, winning or landing. Worse, for those watching at home (those not stupid or brave enough to attend), and for the long-term future of Derek Chisora’s health, in his efforts to land this elusive punch Chisora would end up enduring the kind of beating redolent of Larry Holmes vs. Randall “Tex” Cobb in 1982; a beating so severe commentator Howard Cosell vowed never to cover another fight. “I wonder,” he said that night, “if that referee [Steve Crosson] understands that he is constructing an advertisement for the abolition of the very sport that he’s a part of?”

Presumably, Cosell, had he been the third man in the ring that night, would have stopped that particular massacre as early as he could. And yet, here, in the case of Fury and Chisora, despite what we had seen previously (during their first two fights), and despite what we saw in the ring on December 3, 2022, nobody – not the referee, nor, more worryingly, Chisora’s own corner – saw any reason for the fight to be stopped until two minutes and 51 seconds into the 10th round.

Scarier still, when at last the fight was stopped, we then got our biggest indication yet that the type of fans this fight targeted were not necessarily the type of fans who give a damn about the health of the two boxers involved. The sign was a sound: widespread booing. They booed, as a collective, the end of the violence. They booed the fact they would no longer be able to see a human being treated like a punch bag. They booed the fact they would have to now go home with their thirst for blood not entirely quenched the way they had hoped when earlier making the pilgrimage to North London on a cold December night. 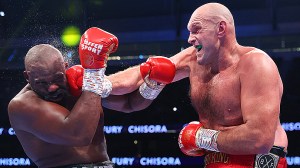 This, one suspects, is what allows these types of fans to watch a man like Derek Chisora, 33-13 (23), take punches round after round and somehow see the fun in it. They see him not as a boxer or human being but instead a cartoon character, an object, a larger-than-life personality with only meme potential; as disposable as everything else in their life.

On the flipside of that, however, when you’ve watched Chisora’s entire career unfold, it’s much easier to have empathy. That doesn’t mean you necessarily care about him or what happens to him (Chisora is, let’s not forget, the one behind the wheel here), nor does it mean enough for you to vehemently argue against his reasons for carrying on (all prizefighters are inherently greedy). All it means, I suppose, is that you see the method behind the madness; the damage done by the punches; the fear of retirement, perhaps the only opponent more frightening than other heavyweights. All it means is you see the devil in the eyes of those in his team who keep pushing him back in the ring for more. All it does is make nights like tonight, not unlike the two previous fights between Fury and Chisora, tough to forget – for all the wrong reasons.

As for the parasites in Chisora’s team and the fans new to the sport who understand not a thing about it, tomorrow is just another day. They will read about the concern of others on social media, or maybe listen to the concerns of others on a hundred different podcasts, and they will, as is their custom, ignore the post-fight hysteria just as they did pre-fight, when everyone, to a man, said exactly the same stuff they are pointlessly both writing and saying today.

Panel: How much interest would you now have in Chris Eubank Jnr vs Conor Benn should it be rescheduled?

October 11, 2022 Karl Boxing Comments Off on Panel: How much interest would you now have in Chris Eubank Jnr vs Conor Benn should it be rescheduled?

OWING to the fact he has for so long been sold to us as a bona fide pay-per-view star, be it as either an A-side or B-side, it is very hard not to judge heavyweight […]

Though quick to win it, Joe Cordina’s reign as a belt-holder was sadly short-lived

October 11, 2022 Karl Boxing Comments Off on
Though quick to win it, Joe Cordina’s reign as a belt-holder was sadly short-lived

“Welsh Wizard” Joe Cordina pulls out of a November 5 fight against Shavkatdzhon Rakhimov due to injury, then promptly loses IBF belt DESPITE the dramatic manner in which he won his IBF super-featherweight belt, Joe […]